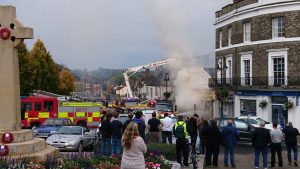 Police were contacted by the fire service around 5pm on Friday 29 September, to reports of a blaze at a retail premises in Angel Hill, where at least a dozen fire engines had been sent.

No one else is believed to have been harmed, however the building has been destroyed as a result of the fire and properties adjacent to the shop also sustained smoke damage.

Angel Hill remains closed to westbound traffic only (affecting motorists travelling from Eastgate Street) as fire crew assess the structural safety of the building. It is expected to fully reopen around lunchtime tomorrow, Sunday 1 October; however, it is open to pedestrians.