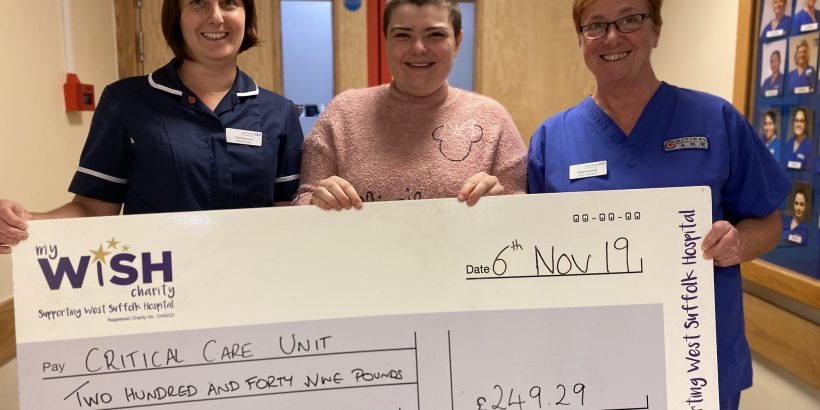 A teenager has raised £240.29 following the “amazing” care she received in the critical care unit at the West Suffolk Hospital by having a charity head shave
Seventeen-year-old Casey Davies spent two-and-a-half weeks on the ward after suffering from sepsis.
She said: “I wanted to thank the critical care team for all the support they gave me and my family. It was absolutely amazing. I didn’t know much about what was going on when I was in critical care so they made me a diary which they wrote in every day so I knew what was going on and who was looking after me and who came to visit. It gave me and my family reassurance that I was being cared for. I am so glad that I shaved my hair off for the critical care team and raised £240.29 which is going towards a good cause. I hope to raise more money in the future for the My WiSH Charity. Thank you all so, so much at the critical care team. Words can’t describe how thankful I am.”
Casey hoped the fundraising initiative, which was carried out where she lives in Ipswich, will also help raise awareness of sepsis, diabetes and pneumonia.
Her mother Tara praised Casey’s efforts saying: “What she did was really brave.”
Sally Daniels, My WiSH appeal manager, thanked Casey for being brave enough to shave off her hair all the name of charity saying: “The money raised will make a difference to so many people and it is always fantastic for the staff to hear how appreciated they are. They really do go above and beyond.”
Bury St Edmunds
9°
mist
humidity: 87%
wind: 2m/s E
H 17 • L 9
Weather from OpenWeatherMap
5 day forecast