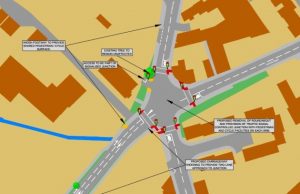 Suffolk County Council have confirmed that plans to put traffic lights on the Tayfen Road, Ipswich Street and Station hill round about won’t go ahead.

Councillor Jane Store said that Further discussions over the Bury St Edmunds Masterplan have shown some significant changes, which could change traffic flows, as well as demand, on Tayfen Road and the associated junctions.

She added that the roundabout won’t be removed at this time but they will review it again once the new traffic flows and demands for the area are fully understood.

It comes after a four-week consultation where the public agreed plans to improve traffic flow and facilities for pedestrians and cyclists along Tayfen Road and its surrounding area which will see improvements to Compiegne Way by extending the two-lane vehicle approach to the roundabout. A toucan crossing will also be installed at the Northgate roundabout and the cycle path from Cannon Street will link to the existing pedestrians / cyclists space on Fornham Road (connecting to The Maltings cycle bridge). These works will increase vehicle capacity in the area, create more efficient traffic movement around the roundabout and provide improved pedestrian and cyclist facilities.