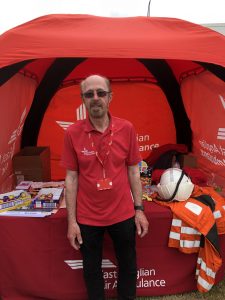 A man from Stanton has won an award for his volunteering work with the East Anglian Air Ambulance.
Terry Southgate has been volunteering with the EAAA since early 2018, and last year became their main bucket collection coordinator for Norfolk and Suffolk.
In 2019 he raised a staggering £17,000 through his collections, including over £3,000 in one week as part of National Air Ambulance Week.
The East Anglian Air Ambulance’s (EAAA) Inspiration Awards aim to recognise and celebrate the exceptional community which keeps the life-saving charity flying and saving lives.
The service say that they want to commend and thank Terry for his enthusiasm and passion and have awarded him the The Jamie Edghill Award for Exceptional Volunteering

Terry Southgate said: “I am really honoured to receive this award, it means so much to me to be recognised in this way for something that I love doing and gives me great satisfaction. It’s a great team at EAAA and it’s been my privilege to be involved with such a wonderful organisation. I would like to thank everyone who nominated me, and all those voted for me. And also a huge thank you to all the wonderful volunteers who have helped me with all my collections.”

Phillipa Levy, Special Events Fundraiser at EAAA, said: “All of our supporters are a constant reminder of the fantastic community that we serve and are a true inspiration to us, as without them, our service couldn’t continue. The EAAA Inspiration Awards allow us to give something back to that community and share their incredibly heart-warming stories. Terry is a huge part of our volunteering team and a fantastic ambassador for EAAA. We’ve very lucky to have him supporting the charity and he is very deserving of this award.”

This award is dedicated in memory of Jamie Edghill, an EAAA volunteer who sadly passed away earlier this year. Jamie gave so much of his time to help and support EAAA. Hopefully this award will be a way to remember his incredible support and create a legacy that will live on and inspire others.

Nominations are put forward by EAAA staff and recognise those who have inspired the EAAA team in different ways, with nine different award categories (Inspirational Business, Donor, Events Fundraiser, Fundraising Team, Group or Club, Patient or Patient’s family, Crew Member, Lifesaver, Volunteer and the CEO Award). Four of the award winners were decided by a public vote, including this award for Inspirational Business.  Inspiration Award certificates on their way to the winners.