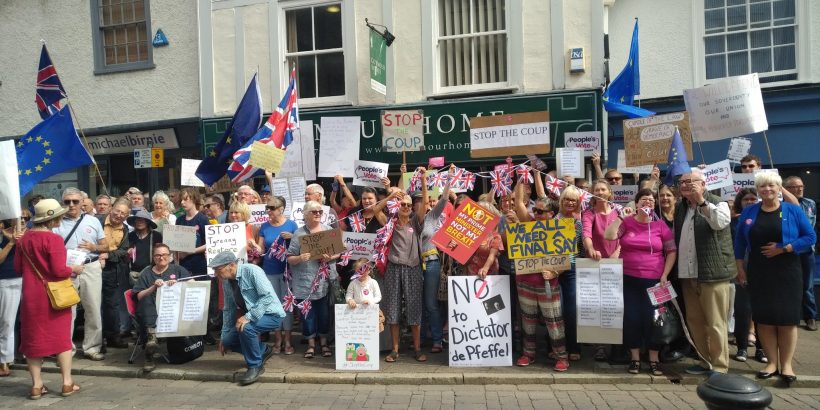 More than 150 people took to the streets of Bury St Edmunds today to protest against the Prime Ministers suspension of parliament ahead of Brexit.

Within hours after the Queen approved Mr Johnson’s plan, thousands of people demonstrated in cities including London and Manchester and Tens of thousands expressed their interest on social media for demonstrations titled “Stop the Coup, Defend Democracy”,

Jeremy Corbyn has endorsed the protests, which are happening in around 60 towns and cities across the country, and urged MPs to join demonstrations.

Helen Geake, Green party member and Barbara Gibson, the MEP for the eastern region both took to the streets along side demonstrators.

Christina Birt, group lead of Bury St Edmunds Open Britain, said “With less than 24 hrs notice, 150 local people turned out to protest. By proroguing parliament Boris Johnson is taking away control and Bury St Edmunds is furious. Protesters are calling to Stop the Coup and demanding our democracy back.”
She added that “It is outrage that our MPs are being shut out of Parliament. They are elected by us to represent us and we need them to save us from the threat of a No Deal Brexit.”

The protest took place in Hatter Street out side of conservative MP Jo Churchills offices.