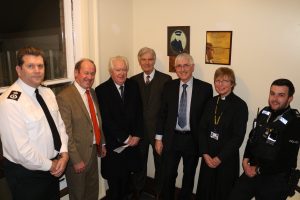 A plaque to the memory of three officers from the former West Suffolk Constabulary who were killed in the First World War has been unveiled at Bury St Edmunds Police Station.

A minute’s silence was held after Supt Kim Warner read the Ode to Remembrance.

Lord Phillips of Sudbury, who described it as an honour to be asked to speak, said: “A minute’s silence is such a small thing when you consider why we are here and what we are honouring. You cannot give any more than your life.”

The PCC echoed Lord Phillips’ comments. He said: “It is so important that we never forget the men who had died to ensure the freedoms enjoyed today and I am very pleased that the Constabulary has honoured the officers killed in the first World War.

“Our police officers risk their own safety every day and I’d like to take this opportunity to thank officers, both present and past, for their service; this is why British policing as the best in the World.”
Chief Constable Gareth Wilson said: “It seems strange that it has taken so long to discover that these officers from the west of the county died in combat but I am extremely grateful that we have been able to do so and provide a small memorial in remembrance.”

Eric Hopes, curator of the force museum had discovered that no police memorials in the county made reference to officers from the west of the county. Eric’s colleague, John Saunders, who is a local historian and Suffolk NARPO (National Association of Retired Police Officers) chairman, then took on the challenge on finding out more.

John said: “Nothing came from the usual sources of enquiry but on one of my visits to the Suffolk Records Office at Bury St Edmunds I was researching other matters and laboriously going through editions of the newspapers for 1916. There on 1 November was an article of tribute to Thomas Christopher Reeder.”

This inspired John to work through all other pages of the newspaper over a period of five years to 1920. In another article from 1919 it was reported that three officers of the West Suffolk Force had been killed in action.

PC Reeder was stationed in Bury St Edmunds and Sudbury. He died on 12 October 1916, having served as Company Sergeant Major of 7th Battalion of the Norfolk Regiment.

PC Capon was stationed in Bury St Edmunds, Boxford, Sudbury, Newmarket, Lavenham and Kersey. He served as a gunner in the Siege Battery of the Royal Garrison Artillery, dying on 9 April 1918.

PC New was stationed in Bury St Edmunds and Haverhill. He died on 10 August 1917, having served as Acting Bombardier in the Siege Battery of the Royal Garrison Artillery.