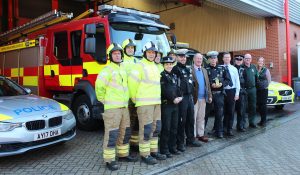 The annual initiative which began on Sunday 1 December, and runs until Wednesday 1 January, will see officers carrying-out roadside checks throughout the day and night – including early morning checks – as well as intelligence-led enforcement activity.
Yesterday, Monday 2 December, officers from the Roads and Armed Policing Team were joined by their Suffolk Roadsafe Board partners – with representatives from Suffolk Fire and Rescue Service, the East of England Ambulance Service and Suffolk County Council – to launch the campaign at the joint Fire and Ambulance Station in Bury St Edmunds.
Also in attendance at the event were the Suffolk Accident Rescue Service (SARS), who are a voluntary emergency medical charity that provides specialist clinicians to assist the East of England Ambulance Service at the scenes of incidents where patients require an enhanced level of medical care before they reach hospital.
Motorists under the influence of alcohol or drugs is a contributary factor to a vast number of serious or fatal road traffic collisions, which can very easily result in all of the emergency services present at today’s launch having to attend the scene.
Suffolk Police is encouraging members of the public to provide them with intelligence about potential offenders to help officers identify who they are, so they can take appropriate action and prevent such collisions from occurring.
For the first time this year, an online portal has been set-up to enable members of the public to report any concerns relating to suspected drink or drug-driving directly to the Roads and Armed Policing Team. Those that would prefer to do this anonymously can still contact Crimestoppers as in previous years.
Suffolk police unveil tough stance on drink and drug drivers meaning that offenders could lose their driving licence within 24 hours with s pecific time slots have once again been reserved at Ipswich and Norwich Magistrates’ Courts to deal with those caught drink-driving.

On the first day of the campaign Suffolk Police arrested 3 people including A 24-year-old man from Bury St Edmunds who was arrested and subsequently charged with driving with excess alcohol after being stopped at around 3.35am in Cullum Road. He is due to appear in court on Tuesday 3rd December.

–       At 12.45am officers breathalysed the driver of a car in Station Road, Southwold. A 24-year-old woman from the Halesworth area was arrested and subsequently charged with driving with excess alcohol. She was bailed to appear before Norwich Magistrates’ Court tomorrow.

–       Officers in Ipswich had cause to stop a car in Bramford Road at around 3.15am. A 45-year-old man from Surrey was arrested and subsequently charged with driving with excess alcohol. He was bailed to appear before Ipswich Magistrates’ Court tomorrow.